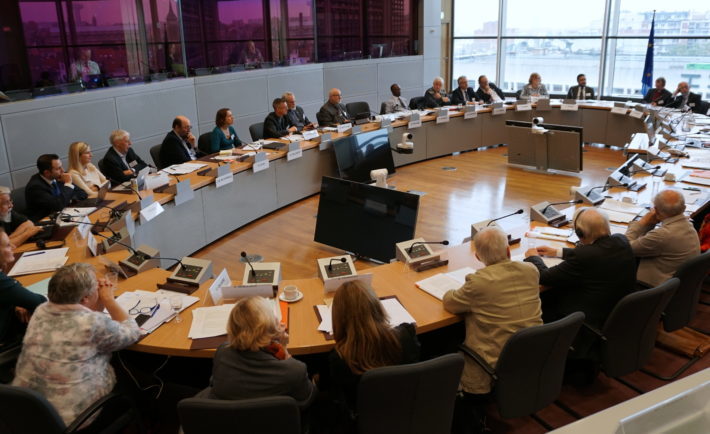 On October 19 CEC held an event in the European Parliament, Brussels, to launch the video entitled “Standing up for Minority Rights” in the presence of many young Serbs and Croats and other international guests. The host of the event was the Croatian MEP Ivan Jakovcic (ALDE). The film explores the situation of religious and ethnic minorities in Serbia and Croatia.

During Holy Week 10-13 of April 2017, 20 young Serbs from Croatia and Croats from Serbia came to visit European institutions in Bruss­­­­els on the initiative of Metropolitan Porfirije of Zagreb and Ljubljana of the Serbian Orthodox Church. The aim was to learn more about the implementation of European values such as human rights, democracy and rule of law, especially in the area of minority rights.

Croatia, a member of the EU since 2013, has robust legislation in the area of human rights, but more work is needed to ensure it is fully implemented in the area of ethnic and religious minority rights. In Serbia, which is a candidate for EU membership, religious and ethnic minorities is still a priority area for work on harmonisation of legislation related to the criteria enshrined in the Lisbon Treaty.

At the 19 October event, Metropolitan Porfirije said that the challenges between Croatia and Serbia needs to be overcome in the spirit of the Gospel, witnessing love for one another. He invited everyone in the debate to listen to the other and to help each other in combating prejudges and xenophobia in their environment. He said that there is a habit for all of us to say that the other is responsible for my situation, as a mean of protection.  However, if we see the other as guilty and never ask ourselves if we contribute to the conflict, then there is no perspective for future progress.

Ms Jelena Nestorovic, Representative of the Serbian Youth National Council in Croatia, welcomed the opportunity for exchange.  She expressed the view that the media and politicians in Croatia shape opinion in less than a positive manner towards minorities which, in turn, negatively effects the relations between majorities and minorities. She said that dialogue is the basic tool to overcome these challenges.

Mr Mario Vrselja, Representative of the Youth Council of Croatia in Serbia said that the work on mutual dialogue and understanding needs to continue. He emphasised that the benefit of the meeting during Holy Week had resulted in strengthening friendships and harmony among their peers and that Serbia needs to improve and build a stronger culture in the area of minority rights.

In the spirit of the Cypriot proverb proclaimed during the debate “If you cannot eliminate the dark you can light the candle”, CEC warmly recommends you to take a few minutes of your time to view the short 5 or 20 minutes video about building bridges between young Serbs and Croats who are standing up for each other in defending the minority rights.

The film can be viewed here.